7 Quick Takes: Too Little, Too Late

2.  Environmentalists’ erstwhile darling Al “Hypnotoad” Gore finally gets a little comeuppance for his outrageous hypocrisy (and totally doesn’t get it when Jon Stewart calls him “Al” to rhyme with the “Al” in “Al Jazeera” — heh).

3.  I washed the pants my husband was wearing when he had to get up at 2 a.m. and drive to the depot to get diesel fuel to restart the furnace so we couldn’t all freeze, and he got diesel on his pants.  I say “too little too late” because they’ve been sitting in the laundry pile for a week, and now all the laundy (and when a mother of nine says  “all the laundry,” I guarantee you that, no matter what you picture, you’re not picturing enough laundry) smells like diesel.  Um, if I put this stuff in the dryer, will it explode or something?  This is a real question.

4.  I have noticed that my kids have no table manners.  None, whatsoever — like, not even their own special set of manners which appear loathsome to outsiders, but which have their own, interior logic.  No, they even find each other disgusting.  I’ve seen my ten -year-old son suddenly become aware of the crimes against decency that he is committing with his food, and the look on his face shows me that there is a natural law that each of us has written on our hearts, telling us what is right and what is wrong, even for things like eating pudding with your hand when you have mittens on.

I say it’s “too late” because the reason they eat this way is because, since our dining room is too small for a table which will seat all of us, I eat in the kitchen.  With no adult present, the kids were free to remain savages.  And now that they are such savages –especially the boys — there is no way you are getting me to go in there and teach them some manners.  Oh, well.  They have other good, marriageable qualities, like, um, keeping their nostrils really well-maintained.  Step right up, girls!  Pick a winner!

5.  It seems that I have won Funniest Blog at the Sheenazing Blogger Awards! 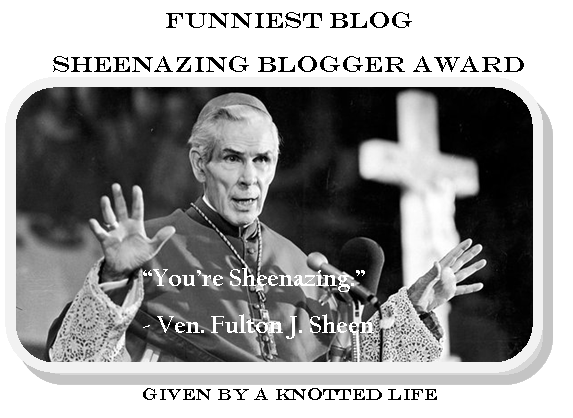 This is neither too little nor too late, but actually just right and just on time, because I have been feeling the opposite of funny, and the opposite of blog.  “The opposite of blog” is when a school kid emails you with a bunch of questions about why people would want to get into professional writing, and all you can think of is changing your name to Ron Mexico and moving to actual Mexico, so people will stop sending you emails about how you (not people like you, but you, personally) are the reason there is still abortion in America today.

So, thank you, dear Bonnie of A Knotted Life, for hosting this neat awards contest, and thanks to everyone who voted for me!  Do check out the other winners and nominees, especially “Best Underappreciated Blog”  and “Best Blog by a Catholic Man.”  Lots I haven’t heard of!  I gotta get caught up.

6.  Sorry, got a little grim there for a while.  It’s just cold.  I’m tired.  I have sciatica that keeps me awake, from sitting funny and lugging a small but very dense baby around all day, or possibly from a tumor.  Yeah, it’s probably a tumor.  Also, out of sheer laziness, I quit taking my iron supplement a while back, and now I’m discovering that apparently I’ve been running mostly on iron.  And we are having seven first-graders over for a Candyland-themed party, and the house, in its current state, is perfectly decorated to illustrate one of those “Seventy-Six Diseased Baboons Removed from House of Filth” headlines on Drudge.  When in fact, we don’t own nearly that many diseased baboons.  We’re just borrowing them.